The main part of the meeting was used to focus on Subtask A: Definitions and Context.

The main topic of discussions was the development of a methodology for characteri-zation and labelling of Energy Flexibility in buildings, as this will be a main deliverable from Annex 67. The methodology is based on the fact that the Energy Flexibility of a building is not a fixed value but varies with the daily and seaso-nal weather conditions, the use of the buildings, the requirements of the occupants e.g. comfort range, the requirements of the energy net, etc. Figure shows an example of the aggregated response of buildings when receiving some sort of control signal – in the following called penalty signal.

The penalty signal can be chosen according to the conditions: often the penalty signal is a price signal, but can also be a CO2 or a RES signal. For these signals, the controller should minimize the price or CO2 emission or maximize the utilization of RES. The penalty signal can either be a step response as in figure in order to test different aspects of the available Energy Flexibility in a building or clusters of buildings, or it can be a temporal signal varying over the year according to the weather and the requirements of the energy net in specific time periods.

Due to the variation of the conditions for obtaining Energy Flexibility the focus is on a methodology rather on obtaining a number.

However, using the methodology numbers may be obtained for the parameters mentioned in the figure and for comparison with the reference case, where no flexibility would have been received. The latter refers to labelling, where buildings including their energy system may be rated by their share of reduction on price/consumption/CO2-emissions etc. (depending on the target of the labelling) when using penalty-aware control instead of penalty ignorant control.

The methodology for characterization and labelling of energy flexibility applies to both simulation of buildings not yet erected for optimization of available flexibility, and measurements from a building or neighborhood. 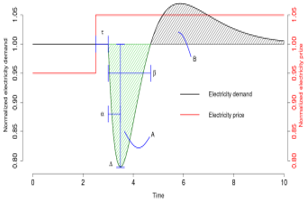